In the autumn of 1987, Holtye beat the favorites West Hove, in the final of the Whithread Trophy at Ifield Golf Club by 7 1/2 matches to 4 1/2 to become the first ever nine-hole Club to win Sussex's premier inter-club cup competition. 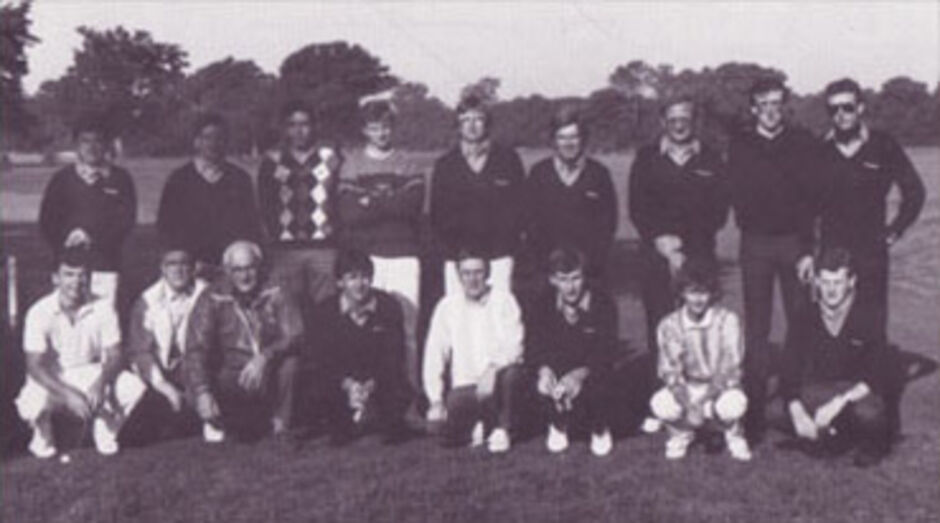 Holtye had previously never progressed further than the quarterfinal stages. Even today the bare facts do not do justice to what the newspaper scribes of the time headlined "the impossible victory".

To understand better how David beat Goliath five times running that season, (Highwoods and Royal Ashdown at home, Crowborough away, Worthing at neutral West Hove and the big prize West Hove at neutral Ifield in the final) you have to appreciate, as bookmakers do, that in sport the best team on paper does not always win.

In county golfing terms, Holtye was definitely considered unfashionable; a nine-hole course and team handicaps ranging from 3.9 - 6.3. This judgment failed to recognize properly their all round strengths; Phil Scarles had won the Sussex Amateur Championship in 1983 and been an England Boys International; Ben Clarke had already made his mark at Sussex junior/Colts level; John Couling and Trevor Barnes were supremely gifted shot makers; John Holmes was a tenacious match player at the highest level; three seasoned campaigners completed the line-up, Barry Clarke, Ben's father, who doesn't know what a lost cause is; Steve Sands, the quiet man of the team for several years who relentlessly collects his points with the minimum of fuss; and Dick Hogg, former Kent county golfer with vast experience.

Most of our opponents knew little of the team's pedigree and some probably underestimated the threat we posed. A good balanced team is one thing, but how do you instil that self-belief necessary to win a major golfing title? The winter practice matches and team meetings helped gain the early confidence-boosting home win against Highwoods 9-3 but it was the away victory at Crowborough in the second round that suggested the possibilities of a good run in the Whitbread.

That win at Crowborough was quite unforgettable; the superb terrace overlooking the 18th green was packed with Holtye supporters, well fed and refreshed by Sue Haslam's open invitation to her house a stone's throw away, and they were treated to the sight of 3 out of 4 Holtye pairs hitting the long and difficult 18th hole in two shots, scoring a birdie and two pars to go into lunch 3 1/2 - 1/2 ahead. The performance in the afternoon singles was again excellent resulting in a superb victory by 8 matches to 4 with a home draw in the quarter-final against Royal Ashdown to follow and a chance to progress to the semifinal for the first time in our history.

Our supporters' spirits were also high. Each team member had a dedicated, highly motivated caddy, and even in some cases a reserve caddy was waiting in the wings! The caddy roll of honour this year included, Rob Vincent, Hugh Stuteley, 'Mac', Michael Payne, Douglas Hogg, Emma Hogg, Valerie Clarke, Brian Braban and Clemmie Hogg. Another important factor was the loyalty and commitment of our reserves, in particular lan Gibb, so close to being chosen for the later stages after his valuable singles half against Highwoods, but always 100% supporting the team with his clubs in the car ready for the call.

Another key supporter was Ted Lovell who pops up from behind whin, bush, tree and foliage to give a word of encouragement here, a discreetly clenched fist there and if pressed will show you his hole-by-hole match standings on the back of his famous Embassy packet for each player, just in case it's really close or goes to countback.When Phil Scarles drilled a six iron second shot through the wind to within 15 feet of the flag on the 17th at West Hove to secure at least a half in his match and thereby certain victory for Holtye in the semi-final, nearly 100 supporters that lined the fairways produced a Holtye roar that was to be repeated many times at Ifield in the final.

The foundation for this achievement against all the odds was again built on a morning foursomes advantage,this time by 3 matches to 1. The opening combinations of Phil Scarles and Ben Clarke, John Holmes and John Couling, brought in resounding wins of 7 & 6 and 7 & 5 respectively, followed up by Trevor Barnes and Barry Clarke with a useful 4 & 2. The substantial holes up countback advantage meant that the Embassy packet showed us 'only' requiring 3 singles wins to maybe clinch victory. In fact Holtye gained 3 and 1/2 points to put the issue beyond doubt. Trevor Barnes by 2 & 1. John Holmes by 3 & 2 and Ben Clarke by 2&1 were our heroic winners.

Ben carded 15 straight pars from the 3rd to gain his point. Phil Scarles' halved match sent the supporters off totally content to the celebration meal in Brighton. There was one more event that night. Tony Pugh's and Mick Scarles's greyhound, Holtye Tiger, was running in an A8 event over 515 metres at Hove Stadium. Yes of course it won, at 6/1 to cap an unforgettable away day at the seaside.

By now, Holtye was on a roll. Domestic competitions came and went, Monday to Friday jobs were still being performed but the team had thoughts of nothing else but victory over West Hove at Ifield. Keen practicers practiced but the advice at breakfast that Saturday morning was, once again, get focussed, play positive, and don't press too hard for birdies.

The precise details of who won or lost seems irrelevant today, but no one who saw it will forget Barry Clarke pitching to 12 feet at the 16th from scrubland behind a greenkeeper's hut 30 yards right of the green.

John Couling 6 up after 7 holes on Paul Chandler, Dick Hogg 4 up after 4 on Tim Hoyles; the memories are still vivid.

Ted Lovell's notes had Holtye level or ahead in every singles match at the turn - what a boost for each player as they came through the 10th, and a final memory of this writer is the small group of normally unbiased Sussex County officials running from tee to green telling the Holtye players how it was going!

The morning foursomes had been inconclusive with the scores tied at 2 matches each. The final climax to the afternoon singles thrilled the crowds gathering from all points of the course at the 16th green. Important wins by Trevor Barnes, John Couling and Ben Clarke gave Holtye a slight edge; then within a few minutes Steve Sands marched back from the 18th green with a vital half in the bag, Barry Clarke emerged from the 'famous' greenkeeper's hut to hole his 12 foot putt and Dick Hogg cleaned up his opponent on that same green.

The impossible victory was ours and champagne flowed. The key all season had been commitment, loyalty and team spirit - all of those intangibles which are so difficult to force, but when you have them in place, you know it and you can conquer against any odds.